Tragedies and ‘miracles’ in the Central African Republic (CAR)

You are here:
Central Africa 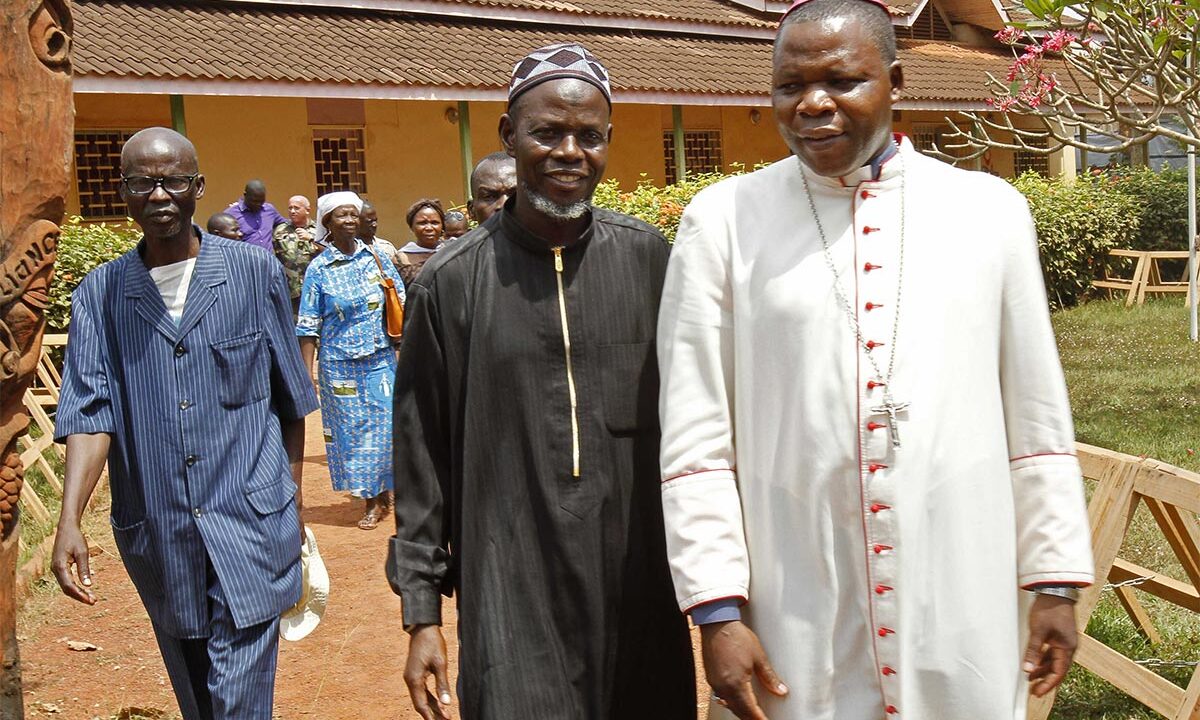 He is the youngest Cardinal of the Church and a Spiritan Missionary. He spent a week at the Generalate House of the Congregation in Rome, involved in countless meetings, contacts and interviews. Long conversations and celebrations helped to put together the profile of a courageous missionary and show the reality of a country which is still torn by violence – violence that shows few signs of coming to an end. The Pope’s visit to Bangui, the Inter Religious Platform for Peace and the many interventions in the context of extreme violence give hope for a better future to this country in the heart of Africa.

Some years ago, as a young man from Bangassou, Cardinal Dieudonné, now 54 years of age, asked to join the formation programme of the Congregation in CAR. He had a simple and smiling manner. In books and interviews, he always speaks of the inspiring example of the Spiritan Missionaries who marked his childhood, especially that of Fr. Leo, a Dutchman, who played football with them. He was a rather ‘different white man’ from the others who didn’t walk about the neighbourhood and didn’t mix much with the people. “It was Fr. Leo who inspired me to want to become a priest like him”. He learned from him that becoming a priest wasn’t a vocation just for the youth from the city. It was open to all young men.

He studied in Spiritan seminaries in Cameroon and Gabon, before being sent to Paris to complete his theological formation at the Jesuit Centre in Sèvres street. He was ordained priest in Bangassou in 1998 and spent his first eight years of mission in Marseille, in the organization “Apprentice Orphans of Auteil”, while helping out in a parish. On his return to CAR, he was elected Superior of the Spiritans in 2005 and in 2009 Administrator of the Archdiocese of Bangui. In 2012 he was appointed its Archbishop. Two great surprises were in store for him: the visit of the Pope to Bangui in November 2015 to open the Holy Door of the Jubilee Year of Mercy and his appointment as Cardinal, announced on 9th October 2016.  This made him the youngest Cardinal in the Church!

The Central African Republic continues to be in a state of fire and sword. As in all wars, it’s the ordinary people who suffer most: they are killed, tortured, displaced and abused. And, of course, the economy is in ruins, thanks to profiteers and traffickers who make fortunes at the expense of the martyrized population. The international forces, sent by the UN and the African Union, try to defend the people in the most affected areas, but they have not been very successful. The presence of Portuguese soldiers was praised by the Cardinal.

In 2013, the Inter-Religious Platform for Peace in CAR was established. The country had been overrun by rebel groups, self-proclaimed Islamists. They sowed panic, killing and destroying. The capital itself was split into neighbourhoods according to the warring factions. The three leaders of the major Religious Communities in the capital met and decided to work together to bring about reconciliation: Cardinal Dieudonné, Imam Omar Kobine Layama and Pastor Nicolas Gbangou. This effort opened one of the most beautiful pages in the recent history of the CAR – a great example for Africa and the rest of the world.

The Cardinal tells of how when a Muslim was killed in the capital, the response was to kill 20 or 30 Christians. Thanks to this platform and to the Pope’s visit, everything changed for the better. The three leaders made countless visits throughout the country, took the risk of confronting the armed groups and launched various initiatives to raise awareness and bring about a commitment to peace. They cried out for support from the international community, amplifying in this way the cry of the people martyrized by outside interests.

Cardinal Dieudonné, a key figure of the Platform, insisted on the importance of working together, despite the differences. This gave strength to their mission because it generated trust within the Catholic, Islamic and Protestant communities.

The ‘Miracle’ of Pope Francis

Pope Francis surprised everyone with his decision to go to Bangui, a city in flames, to open the Jubilee Year of Mercy. The Pope was radical in his choice of trips, symbolic gestures and metaphors. It was a ‘miracle’, the Cardinal confesses with emotion. On 30th November 2015, the Pope opened wide the Holy Door of the Cathedral of Bangui, launching a cry for intervention and help from the international community to bring about stability and peace in CAR. The Pope said: “Bangui today has become the spiritual capital of the world. The Holy Year of Mercy is inaugurated in this land, a land that has suffered from war, hatred, misunderstanding and absence of peace for several years”. Photo shots travelled all over the world and CAR was put on the map of countries in need of support.

The Pope had the courage to go to ‘Km5’, a radical Islamic neighbourhood. Many of the Muslims appreciated this visit so much that they followed the Pope to the stadium and took part in the Mass together with the Catholics. In his homily, the Pope put his finger on several wounds, asking everyone to lay down their weapons of death and to have faith in justice, love and mercy. From this intervention of Pope Francis, Cardinal Dieudonné highlights the reference to love of enemies as a radical evangelical value. The Pope said: “One of the essential demands of the Christian vocation is love for one’s enemies, which protects us from the temptation of taking revenge and continuing the spiral of endless reprisals”.

The Pope’s visit to Km5 set a precedent. From then on, whenever a Muslim died a violent death, the Cardinal would go to the neighbourhood and things would calm down.

Mgr. Dieudonné praised the courage of the Pope, for just a week before his visit there had been direct confrontations in the capital. “The Pope had the courage to take the risk. His visit gave hope. His presence brought comfort and allowed free and transparent elections to be held, with the people voting in peace. For six months no shots were heard”.

From violence to relative calm

However, after those six months of grace, violence returned in force, with the rebels once again taking control of the country, a dramatic situation that lasted until the beginning of 2021, when the government troops resumed their positions. For the rebels, only diamonds, gold and cattle are of any interest…

The Church of Our Lady of Fatima in Bangui was the scene of one of the most murderous attacks of this cruel war. It was on 1 May 2016, the feast of St Joseph the Worker. A rebel gang attacked the Church during Mass, shooting at the priests and the people. They killed a priest and six faithful.

2017 was marked by a massive attack of the rebels on Bangassou, hometown of Cardinal Dieudonné, whose bishop is Mgr Joseph Aguirre, a Spanish missionary. Images of this bishop welcoming Muslim families into the cathedral were widely disseminated. In fact, the rebels took everything in their stride, without regard for the religion of the people. Those who escaped were given shelter in the mosque and in the cathedral. Cardinal Dieudonné praises the enormous courage of Mgr Joseph who risked his life to save lives, mostly Moslem, showing what inter-religious dialogue looks like in practice. International troops intervened and calmed the situation down a little.

The following year, 2018, was equally terrible. The rebels stormed all the towns of the country, causing the structures of government and public order to collapse. The humanitarian situation became extremely serious and there was total insecurity. The town of Alindao was barbarically attacked and about 60 people were massacred. The Bishop’s residence was attacked and two priests were killed. Mgr Dieudonné went to Alindao and, on his return to Bangui, he held a press conference together with Imam Layama, crying out: “We cannot keep silent!” The two leaders denounced the inability of the government forces and the international contingent of soldiers to stop the barbarities of this armed group which acted with total impunity, terrorising the defenceless population. They also spoke of the malnutrition of the population in general, calling for urgent support from the international community.

2021 started off calmer. Before December 2020, according to the Cardinal, ¾ of the country was in the hands of the rebels.  On the 19th December 2020 a huge group of rebels marched on Bangui and were only stopped at the entrance to the city. Today (May 21st 2021) 80% of the territory is controlled by the government! You can move about freely in Bangui. But in the countryside one has to be careful because the rebels are in hiding; they are still armed and are now ambushing on the roads and paths.

In a new book, coordinated by the French journalist Laurence Desjoyaux (“Je suis venu vous apporter la Paix” / I have come to bring you Peace), the Cardinal explains how, with faith, the temptation to despair always gives way to hope. God is the source of peace. And, above all, it is necessary to work in harmony with all those who want peace and the well-being of the people. He says: “I am not alone in this mission: Catholics, Muslims and Protestants, we walk together and we all speak of peace to the people. Speaking of the recognition (or not) of the leadership that this Platform exercises, Mgr Dieudonné uses images: “We are a kind of locomotive which pulls the wagons of the train towards the desired station…”

Mgr. Dieudonné is happy with the progress made, although he is aware of how much remains to be done. He rejoices in the unconditional support of Pope Francis and in the fact that the people feel freer and more confident. He considers Inter-religious Dialogue fundamental and explains why: “There were lots of speeches about the situation; then we gave individual community speeches (Catholic, Protestant, Islamic); finally we sat down and arrived at an inter-religious speech”.

The relations of religious leaders with political and military leaders are always difficult and tense. When one speaks of imposing justice as the way to peace, one is misunderstood and badly accepted. But one has to sit down, dialogue and find paths leading to justice and peace.

Nicknamed in a book ‘Cardinal Courage’, Mgr. Dieudonné said that he only took the risk of going to meet the rebels empty-handed because “courage is supplied and strengthened at the source of Faith”. And he recalls the phone calls from his mother asking him not to take risks, to which he replied: “Mother, I am a Bishop, this is my Mission. Don’t ask me not to take risks, don’t add to my problems. Rather, pray. If I die, I know why I left this life!”

When confronted with the fact that he is on a pedestal before the international community, his response is: “I am poor, coming from a poor country. I have no driver, nobody opens and closes doors for me; I don’t let vanity take over. If I had accepted their offer, the government would have given me a car and a bodyguard. I turned it down. I remain close to the people. Ministers and poor people come to my house. I receive everyone. And I go out to meet them all, never thinking if it is risky or not. I am not afraid of the challenge of going out to the peripheries. I like to be there. As Pope Francis says, we are the Church going out to others”.

Speaking of the living Church in Africa, now sending missionaries to the ‘old’ continents, Cardinal Dieudonné insists on the relevance of the Spiritan Mission: “Commitment to the very poor is essential. Going to the peripheries is at the heart of my pastoral choices”.