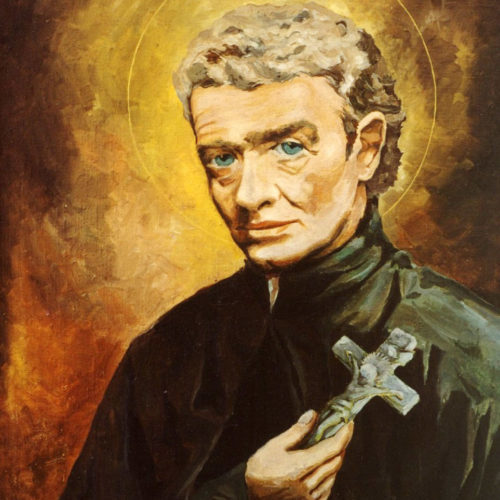 Jacques-Desiré Laval was born in Croth, Normandy, on September 18, 1803. He became a doctor, but always felt God’s call to be a priest and a missionary.

“True. I hesitated all along between the priesthood and medicine. I chose medicine and now I see that I was wrong. God is calling me. This is my vocation. As a priest I shall be able to more good. I must follow the voice of God.”

Jacques Laval was ordained in 1838 and served as a parish priest in Pinterville, a small parish of 486 inhabitants. He loved young children and became a popular teacher of catechism. Much as Fr Laval wanted to work on the foreign missions, he made no move to have himself appointed to the missions. He was awaiting God’s call if that was God’s will.

In 1841, he was asked to work with Francis Libermann among the 70,000 recently liberated slaves on the island of Mauritius. Three out of four had been baptized but no one had bothered to teach them the elements of the Christian religion. Marginalized, they were treated “as beasts of burden”. Single-handedly, Fr Laval set about the task of evangelizing them.

He first taught those whom he contacted to love God and love one another. He taught some of them to become his helpers in preparing others for reception of the sacraments, caring for the sick and leading groups in communal prayer. From the start Fr Laval was deeply conscious that prayer was the most important human contribution, more vital even than skilled organization.

“The good Lord for whom we are working has blessed our efforts and has made his word bear fruit.”

“I have never seen so complete a change in the conduct of such a large number of people as that which has taken place among the blacks. Under God the credit for this great work belongs to Fr Laval, the man destined by God to work the conversion and the reform of this unfortunate people. …With the aid of his confreres, Fr Laval has spread the faith and piety everywhere blacks are to be found in Mauritius.”

In 1853 Fr Laval wrote about their pastoral work:

“Port-Louis, where I am working, with around 30,000 people, all of whom have to be visited. We have to teach, catechize, console, visit and administer the sacrament to all these people, so you can see that there is much work to be done. The good Lord for whom we are working has blessed our efforts and has made his word bear fruit. This country, and above all the poor blacks for whom we have been sent here, did not even know that there was a God when we first arrived.”

Fr Jacques Laval died on September 9, 1864. About 40,000 people – half the population of the island – turned out for his funeral, witness to their appreciation of his work. Thousands of pilgrims of different races and religions visit his tomb chanting: “No Saint in heaven like Fr Laval.” Fr. Laval was declared Blessed by Pope John Paul II on April 29, 1979. This was that Pope’s first beatification.