You are here:
IndiaVietnam 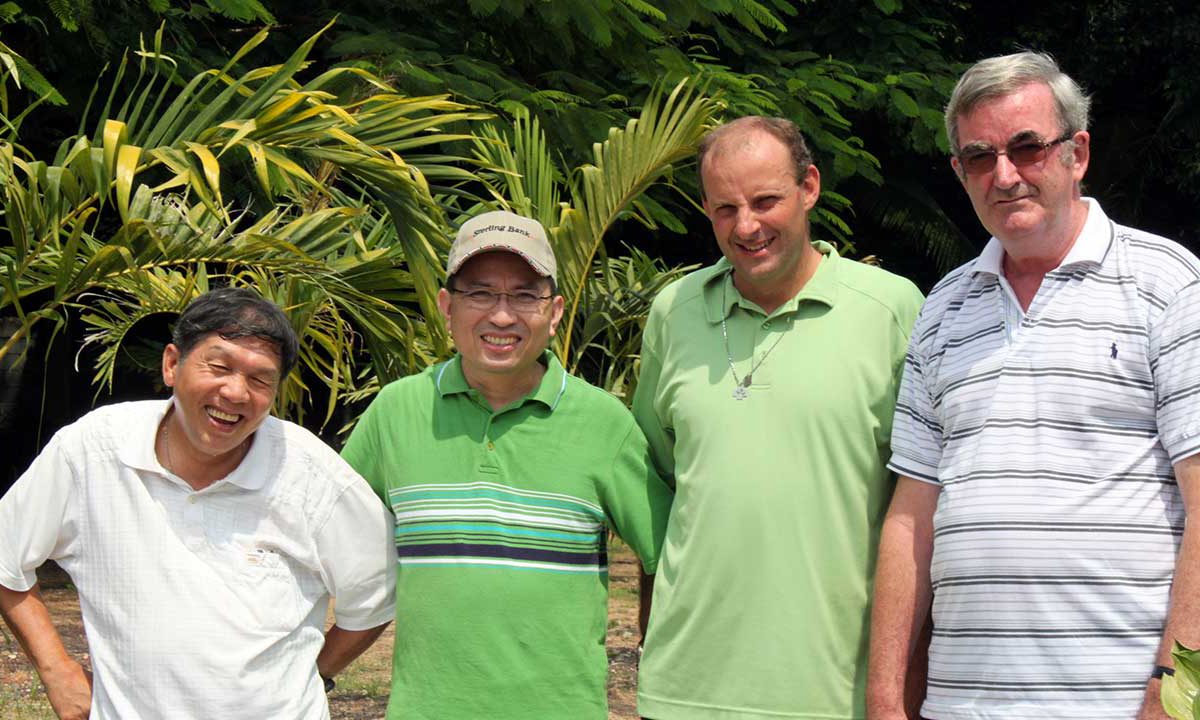 At the last Enlarged General Council, Fr. Pat Palmer presented the history of Spiritan presence and mission in Asia and particularly in Vietnam and India. We have collected his testimony.

At present the Spiritans are working in 6 Asian countries. The first missions started in 1977 in Pakistan and Papua New Guinea. In 1997 the missions to the Philippines and to Taiwan started; 2007 saw the opening of the mission to Vietnam and in 2010 the mission to India.

This year we will see the first Spiritan going to live and work in China. Our outreach to Asia was partly in response to the late Pope John Paul 11’s call on missionary groups to reach out to Asia in the new millennium. Asia is where the bulk of the world’s population live; it is where all the great religions of the world originated and it is where there is the least number of Christians.

One thing we need to remember is how culturally and religiously diverse Asia is, much more than any of the other continents. All our missions are very different and so need a different approach.

Our missions touch on most of the major religious and cultural forces in Asia, Islam (Pakistan), Hinduism (India), Buddhism (VN and Taiwan, sort of), Christian (the Philippines, PNG) and Secularism (Taiwan). We are also working in very different political situations ranging from democratic to semi democratic to semi dictatorship. What these different countries do have in common is that with the exception of the Philippines and PNG, the Christian community is a small minority, a tiny one in some cases, Pakistan and Taiwan.

Another point I think we should keep in mind is how central Asia is becoming in terms of world economics and politics. China and India are always quoted as growing world powers but many other countries can be included in this. There is great energy and initiative coming out of Asia. The Church needs to be part of this energy and initiative. While Asia is a religious continent with strong forms of spirituality, it is also increasingly materialistic and losing its religious consciousness. Hinduism and Buddhism are the religions of eastern Asia where we are. It can be asked what Christianity can bring to this continent which has such strong religious traditions. As religions it can be argued that they are more a way of life, a philosophy of life, than a religion. There are three areas where Christianity can make an impact. Their concept of God and the afterlife is not at all clear. People are attracted to Christianity, and to Islam, because of their clear idea of God and a clear idea of eternal life. The third area is the social involvement of Christian institutions and, to a lesser extent, Islam. The Church has always provided educational and health services to all people and reached out to the poor. This attracts people in China and in Vietnam. Both countries have always been more open to the Christian message, for various reasons. Both countries were influenced by Confucian philosophy and ethics which is very close to Christian values and ethics.  Within a few years China will have the largest number of Christians, Catholic and Protestant, than any other country in the world including Brazil. But they will still be a small minority.  (Confucianism is about social harmony. Mayayan Buddhism in China and VN; Thereveda B. In Thailand, Cambodia and Laos)

Vietnam is officially a Marxist-Leninist country, a Communist country. One of the few left. To visit the country you would not get that impression. It followed China’s lead after the collapse of Communism in the Soviet Union and Eastern Europe in adopting a capitalist system in its economy. The economy is doing very well. Vietnamese are natural entrepreneurs and good at making money. But it is not a free country and every so often we are reminded of this. There is one party, one policy and no dissent allowed. Facebook is periodically blocked if the authorities do not like some of the stuff on it. When Obama visited last month some critics were confined in their homes. There is religious freedom, up to a point.

The Church in VN is a minority Church about 7/8% of the population. But it is a strong community, well organized and self-confident, up to a point. Dioceses, parishes, seminaries and religious orders function openly. But there are no Catholic schools, colleges or hospitals. And no theological magazines. This is beginning to change with the opening of some private colleges. Very few people from rural VN go on to 3rd level and this is an attempt to rectify this. All educational institutions were nationalized. Foreign clergy cannot work in a parish. Because it was a persecuted Church it is inward looking and has very little missionary consciousness. One of the tasks of foreign groups like ourselves is to try to build up a more missionary outlook in the Church. The Vatican is also encouraging the VN Church to be more missionary particularly towards the neighboring countries. We get frequent visit from Vatican personnel who are beginning to realize how the Church in VN is growing.

Any Order arriving after 1975 is not recognized by the government. We don’t have any parish or school. Our work is formation. And Vietnam is rich in vocations; how long this will last is not known especially as the number of groups coming into the country and especially into the Archdiocese of Saigon, is increasing all the time, 43 in one year. In September we will have over 40 students at different levels of formation. 11 of them will be on PME. We try to discern vocations carefully. We only accept people who have done some type of 3rd level course, never from High School. Discernment continues and there are dropouts in the process. Philosophy and novitiate are done in Vietnam and theology in the Philippines.

The 4 fathers are also engaged in part time and unofficial pastoral work, helping out in the local parishes and in the French speaking and English speaking RC population. So much depends on the local authorities. If the local priest gets on well with them, then no problem. If not then there is a problem. Every so often we are reminded that it is not a free country, just 3 weeks ago with some volunteers.

Getting confreres into VN is problematic. It is almost impossible for someone from Africa to get in unless he is a student or a businessman. When our African confreres from Taiwan come for a meeting we get then temporary visas as sailors. This summer we will welcome a new confrere from the US, Fr.Joseph Lam, also Vietnamese, ordained 10 years ago and another VN confrere, Fr.Duc Luong, who has been working in Taiwan and the Philippines. Within 3 years Vietnam will have its first finally professed and ordained people. They will be a new presence in the Congregation coming from VN and not just the US. We are blessed to be there and it is a sign of hope for our Congregation.

The community in India joined our circumscription 2 years ago at their own request and at the request of the GC. The community started as the initiative of one man from the French Province, Fr.Gabriel Myotte-Duquet in 2010.  He has since returned to France and now there are 3 confreres, Fr.Serge Ballanger from France, Fr.Jean-Francois from Mauritius and a new priest just arrived, or on the way, from Nigeria. The community has one house situated in Chennai, formerly Madras, in SE India. India is a very “religious” country in that Hinduism influences everything. Islam, Christianity and Buddhism are also part of the mix.

India is different, like all the missions in Asia. It is called the largest democracy in the world but when it comes to openness to religion it is anything but. Missionaries cannot get a visa. You are there as a visitor or as a student e.g. Jean-Francois. Foreign clergy cannot work in parishes or open a bank account. Confreres have to bring money into the country in their pockets.

Officially the Christian population is about 2%. Unofficially it could be as high as 10%. But most Christians do not describe themselves as such because they could lose some civil and financial rights. It is a nationalistic Hindu society opposed to other religions particularly Islam and Christianity. They are very afraid of proselytization.

But our confreres survive despite this, in Chennai in SE India, 2 of the Fathers will be perpetual students. There are 7 students at various levels of formation as well as a number of aspirants in different colleges. One of the students is a priest with 10 years’ experience. Some of the students have done most of their formation in E.Africa, Tanzania, Kenya and Ethiopia. So they have experience of mission and it has been a positive experience. However now they feel they should move closer to the Congregation in Asia.  2 will join the novitiate in VN next month including the priest; Novitiate will be done in VN and theology in Manila.

India is a growing group. The Church is long established, claiming St. Thomas as its founder (which could be true), with a relatively high profile because of its educational and medical institutions. Vocations are on the decline but the Spiritans witness to a simple, community life is attracting people. We were there before, in the 19th century, in Pondicherry. Pity we didn’t stay.

India is a very strong culture and exerting its influence on the world. The Church needs to be strong there and our congregation has a definite role to play, to be an outreach to the poor and to live a simple life style which in many way is central to the Christian presence. Image and possessions are a major part of modern day culture and we are in a position to counter it.

One thing which surprised me is the continuing strength of the caste system. Though it is denied, it still exerts a huge influence on people. Lower caste people are still low on the ladder of prestige and recognition and unfortunately that is true in the Church as well. Sometimes a young man will be refused entry to the seminary because of his caste. The challenge is about making ourselves known in the country but also making a contribution. Maybe we can do this in the future in the area of care of special needs people.

The Future: Asia will play a bigger part in the political and economic development of the world. The Church has to be there and witness to a society which is not just guided by materialistic values. The Church is called to preach about God in the Christian image. Asia is a “religious” continent but its image of God and of life needs to be challenged. In VN the Church is established but it has to reach out to the majority of the population which is either non-believing or has a very vague image of God. It also has to become more missionary. In India we are called to witness to a more simple way of life. Our congregation, which has a long experience of working in new and different cultures and of becoming part of those cultures, especially in Africa and S. America, can also be part of the growing Asian Church. There is a huge challenge there in terms of Christian presence e.g. Thailand, Laos, Cambodia where the Christian presence is tiny. And China which has always been a place where we wanted to work. The mission in Taiwan was set up partly to provide a stepping stone to mainland China.

A question to consider is where they will work. should we open new missions in Asia? China is the great challenge.