You are here:
Taiwan 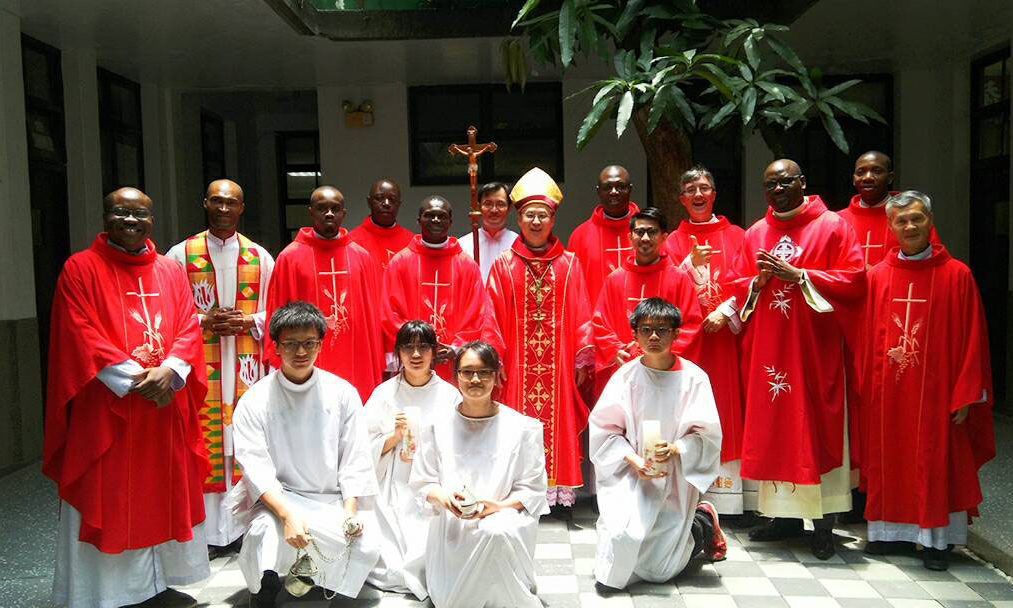 On June 2, 2018, the Spiritans in Taiwan gathered with their friends and co-workers to celebrate the Feast of Pentecost which is also the Feast of the Congregation. The celebration took place two weeks after Pentecost as the local Bishop of Hsinchu Diocese wanted to be present and this was his first available Saturday after Pentecost.

We gathered together with over 150 Catholics who were drawn from our friends, lay associates and co-workers and from our various ministries and parishes. The chief celebrant was Bishop John Baptist Lee of Hsinchu Diocese whereas a reflection on Spiritan presence in Taiwan was given by Fr. Justin Nnaemeka Onyeukaziri who was also representing our local superior Fr Cyr Ntadi who is on home leave. The celebration was marked by great joy and enthusiasm and the mass was followed by a meal and  an assortment of songs and dances that had been organised by different groups.

In fact the Spiritans are celebrating over 20 years of their mission in Taiwan as the first to go there was Fr Sean O Leary who arrived on December 11,1997. He was followed within a year by 3 other confreres from France and Sierra Leonne. Since then, many confreres from various countries have ministered in Taiwan, and one of the strengths of our group is its multi-cultural make-up drawing confreres from West Africa, Europe, Vietnam and U.S.

Over the past 20 years the Spiritans have been involved in many various ministries in the Diocese of Hsinchu including parish ministry, youth ministry, migrant ministry, prison ministry, and formation of local church.

In 2015, a new chapter of Spiritan presence in Taiwan began when a confrere was sent to work in the neighbouring Diocese of Taichong, which is situated in the centre of the island. Fr. Sean O’Leary went to Taichong and is in-charge of two parishes as well as working in the prison ministry. Two years ago Fr. Paulinus Nwanojuo from Nigeria joined Fr. Sean in Taichong Diocese and he is presently learning Chinese and preparing for full time ministry. Later in the year they hope to be joined by a Portuguese confrere Jose Carlos who is presently a deacon in Portugal. Presently there are 6 Spiritan conferes working in Hsinchu Diocese and 2 confreres in Taichong.

We give thanks to God for his abundant blessings and guidance to this mission over the last 20 years in Taiwan. The group of Spiritans here is full of enthusiasm and passion for the mission and for the Taiwanese people who have journeyed with us and taken us into their hearts and who shower us with love and support every step of the way.

This celebration was a time to look back in thanksgiving and to look forward in joyful hope of many more years of Spiritan mission in Taiwan.