You are here:
Reunion 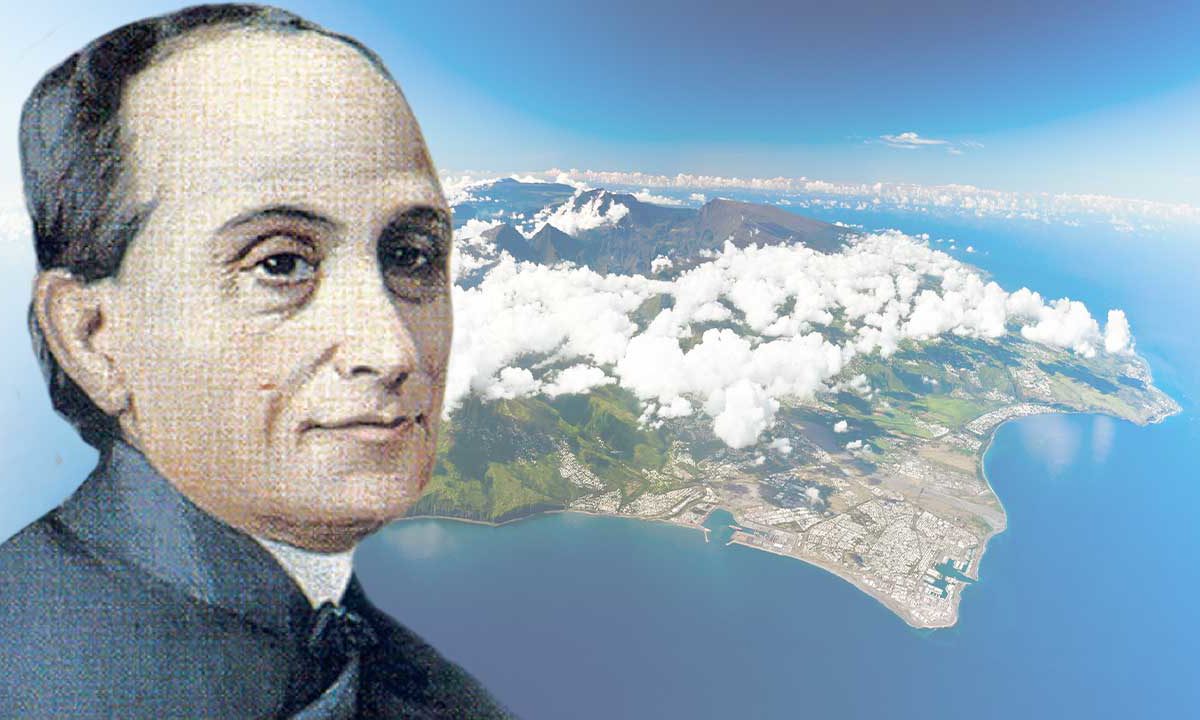 It was on the 28 June1817 that Fr. GUILLOTEAU, of the Diocese of Angers, arrived on the boat “L’Eléphant”. He was sent by M. Bertout, Superior General of the Congregation of the Holy Spirit, who directed the Colonial Seminary that provided clergy to French colonies of that time. Guilloteau would become Director of the Collège-Royal of Saint-Denis and was named Apostolic Administrator. That is about all we know of him. We don’t know his first name, nor the date of his death, or even if he was really a Spiritan. He arrived at the same time as the first Sisters of Saint Joseph of Cluny.

A month earlier, the first Frères des Ecoles Chrétiennes had arrived. They came to succeed the Lazarist Fathers, sons of St. Vincent de Paul, who had been decimated by the French Revolution, but who had planted the Church in Reunion for about one hundred years.

In 200 years, more than 260 Spiritan priest or brothers – not counting scholastics or prefects, whether natives or coming from more than 80 dioceses in France and 15 other countries, have worked in Reunion for some years or for all their lives.

Some of them who were ill only came there to die. Many Spiritans moved about between Mauritius and Reunion. In this work, Fr. Osty created a photo-catalogue of the living and the dead: more than 160 photos were found and identified, with the help of Mme Geneviève Karg of the Photo-Archives in Chevilly-Larue and to Mme Emmanuelle Damour in the Saint-Denis bishopric.

Foundation of the mission in East Africa

Amongst the most remarkable facts of this time, we must mention the foundation of the mission in East Africa. This had its origin in Reunion in 1860, when Mgr Maupoint, moved by the condition of the slaves, sent his Vicar-General, M. Fava to the Sultan of Zanzibar. M. Fava was himself once a student at the Saint-Esprit Seminary and was accompanied by two other priests, then by some Filles de Marie, founded by Le Vavasseur and some lay people.

When they arrived there, these missionaries quickly understood that this mission was beyond them. The Bishop of Reunion then asked Fr. Schwindenhammer, the Spiritan Superior General, to take it over. That is how the Tanzanian mission began, with the first Spiritan missionaries being sent from Reunion – Frs. Horner, Baur and some brothers.

Four Superiors General came from or passed through Reunion: Warnet, Monnet, Le Vavasseur and Le Roy. Several confrères have been bishops, three of them in Reunion: Mgr. de Beaumont;, Mgr. de Langavant, Mgr. Guibert. Six others were bishops elsewhere: Mgrs. Monnet, Vicar Apostolic in Madagascar, Duboin in Senegambia, Le Roy in Gabon, Gourtay in Guyana, Corbet in Madagascar, and currently Mgr. Wiehe in the Seychelles. As well as these we know about, there were many others, more humble, such as the brothers who went to work in social work for the Congregation at La Providence and at L’Ilet-Guillaume in the years 1860-1880. The majority came from this island. In the 20th century, after the establishment of the Cilaos Seminary, about 15 Reunionnais became Spiritans.

This article is based on Fr. Etienne Osty’s book: Memorial of Spiritans in Reunion Two centuries of missionary history: 200 years presence in Reunion. 385p. 2016.

The first impression you have is that the majority of these missionaries inspire huge sympathy. Their lives, of great simplicity, provoke not only respect, but often emotion and admiration.

This reminds one of the portrait outlined by Fr. Joseph Lecuyer of the Spiritan confrères he had met worldwide by the end of his Generalate mandate in 1974. He wrote: “This leads me to express the feeling I had during those years as Superior General: admiration for the generosity of so many Spiritans and the spirit animating them….their simplicity: that is the rejection of all that is complicated, extraordinary, sparkling, precious: no spectacular poverty, no tragic or heart-rending obedience, no strange mortifications…

But there is also and above all the sincere acceptance, without deviation, of imitating Christ, who was poor, obedient, chaste and crucified; they lived without noisy demonstration or useless drama, all in the service of the most impoverished.

Yes, I have found these characteristics in many Spiritans, in those who scarcely spoke about themselves, but who are ready to accept everything, to go wherever they are sent, to live life with the poorest people, to devote themselves to the most humble tasks, without seeing anything extraordinary or unusual in doing so, but rather as something perfectly normal; and, without looking for it, their lives shine with joy and peace. I cannot say the same, alas, of all Spiritans. But there are more of them than you might think. The spirit of the Congregation survives, and it must not be extinguished.”

The great majority of Reunion Spiritans came from modest backgrounds, mostly rural people, with some representatives of the nobility, including – here in Reunion – Mgrs. De Beaumont and de Langavant. Spiritans came to us from the great traditional regions of recruitment for French Spiritans. A third came from the east of France, Alsace-Lorraine – they were the most numerous to come here. Another third came from the west, Brittany especially. Finally, the remainder came from the rest of France. We must mention also a big number of Swiss Spiritans – at least 15 in Reunion and in Madagascar. Another interesting fact, since they were part of a missionary Congregation – some of them really were “travellers”, having already spent several years in Africa or Madagascar. Many others, after some years of apostolate on this island, went off to continue work elsewhere, in East Africa or even India, in the19th century, or even further afield: in West Africa, in Europe, in America, in Haiti or Guyana. But most of the coming and going took place in the Indian Ocean area of Reunion, Mauritius, and Madagascar, particularly with Reunion confreres, sent away from their island to this region. All such movements certainly promoted a capacity to adapt, which we can see with many confreres who carried out in various places remarkable work which marked their passage – such as La Déliverance, Sainte-Anne, Cilaos, Le Chaudron, etc.

Reunion at a glance

At the start of the 21st century, the scarcity of vocations in the northern hemisphere brought about very rapid changes  in recruitment in our Congregation. In 15 years, the colour of our faces has changed a lot. In 2001, we were still almost all whites – French, Swiss, with only some coloured confreres. In 2016, amongst 18 confreres, only 6 white people remain, mostly elderly men. The others come from Madagascar (4), Congo Brazzaville (3), Tanzania (2), Senegal (1), Angola (1), and the Democratic Republic of Congo (1). What a change in 15 years!

Spiritual accounting What spiritual profiles can we draw from these facts? Have our confreres been saints, as the people of Reunionn would often have it? Let’s say that they were firstly men devoted to God and to their flocks. But also sinners, because they were human like us all. Following the 2016 Year Of Mercy called by Pope Francis, we can be more assured that the Lord will be able to recognize their merits and will have pardoned them if necessary.

However, reading their obituaries leads one to believe that they were saintly religious missionaries, who arrived on the threshold of eternity, having achieved something solid in their lifetimes. Some, like Frs. Boiteau or Rimbault died, as we used once say, in the odour of sanctity. Popular piety has already canonised them in some way : Vox populi, vox Dei! Others, nearer to us, such as Frs. Etienne Grienenberger or Louis Rigolet, evoked the same veneration. But most of them were so untypical or original in their way of being and living their spirituality that they will have difficulty in passing the criteria normally used for the causes of saints. What is certain in any case is that they gave their lives to the Church here.

Some lived here more than 60 years. Many died here, buried in most of the parish cemeteries where their ashes serve to enrich the earth. Many have enduringly made their mark on the people of God in Reunion..

Dates of celebrations in Reunion

Sunday, 21 May 2017
Concert of Spiritan parish choirs at Saint-Paul

Monday, 22 May 2017
In the steps of Frs. Rimbault and Grienenberger at St Denis St Bernard

Thursday, 1st June 2017
In the steps of Le Vavasseur