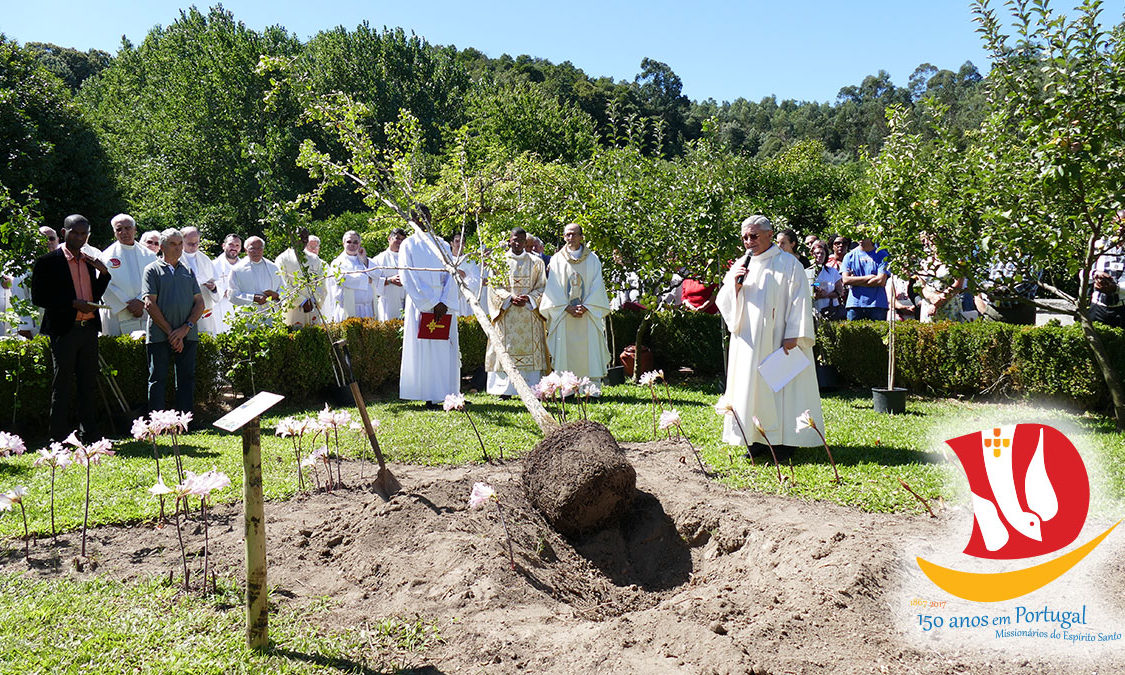 The Spiritans opened the first community in Portugal on the 3rd of November 1867. The initial purpose was to recruit missionaries to be sent to Angola. The 150th anniversary was an occasion to remember the past with gratitude, to live the present with passion and to look at the future with hope. “Joyful in hope” (Rom 12,12) was the motto chosen for the anniversary.

The Spiritans first settled in Santarém, about 80Km from the capital, Lisbon. The city was then part of the Diocese of Lisbon and the place where its Major Seminary was located. But the Spiritans didn’t stay long there. It was in Braga, in the north of the country, that they really deepened their roots. The big Seminary the Spiritans built there still exists. It was taken by the government during the Republican Revolution, in 1910, and it is used as a public High School.

During the first decades, the Portuguese Spiritans were sent almost exclusively to Angola. But latter on were also sent to many other countries, in five continents.

The opening of the jubilee took place in Barcelos, on the 8th of september of 2016, whenthe Spiritans traditionally gather for the religious professions and celebration of jubilees. During the ceremony, a Ginkgo biloba tree was symbolically planted. The same happened in all of the 11 communities in the country. The Ginkgo biloba was chosen as a living symbol of the jubilee because of its longevity, resistance and the fact that it survived the atomic bomb in Hiroshima, becoming a symbol of hope and peace. Also it starts changing into a beautiful yellow around the time of the year the Spiritans first arrived in Portugal.

In November, the Portuguese Conference of Bishops published a Pastoral Note about the Spiritans and their 150 years of presence in Portugal.

On the 18th and 19th of March, the Spiritans organized a workshop on Spiritan Mission Spirituality that gathered nearly 500 participants in Fatima. Maurice Shorthall and Marc Tyrant, members of the General Council visiting the Province, also participated and gave their input.

Pentecost was celebrated with special solemnity this year, with two celebrations in Braga and in Torre d’Aguilha, near Lisbon, with the presence of the local Bishops.

The Pilgrimage to Fatima that gathers, every year, thousands of lay people connected to the Spiritans, in the first weekend of july, was also an important jubilee celebration, with the presence of Fr. John Fogarty, Superior General, and D. Gabriel Mbilingi, Archbishop of Lubango – Angola.

On the 14th of October 2017, a day of conferences was organized with the theme “Spiritan Mission in Portugal: Memory and Promise.” The inputs from the various speakers were very much appreciated. During the day was also presented a latest number of the journal “Missão Espiritana”, dedicated to the late Fr. José Manuel Sabença.

The celebrations ended in November, with the traditional “Magustos” (folk festivals, in the beginning of November, where people gather to eat roasted chestnuts and drink new wine). The Spiritans in Portugal use this opportunity, every year, to gather with the lay movements to build up communion, pray together and organize various fundraising activities. On the 5th of November, two big magustos were organized in the north (Barcelos), with the presence of the Archbishop of Braga, and in the south (Torre d’Aguilha), with the presence of D. Filomeno Dias, Archbishop of Luanda – Angola, and President of the Conference of Bishops of Angola and São Tomé.

Spiritan Ministry with Refugees from Ukraine
2022-03-29